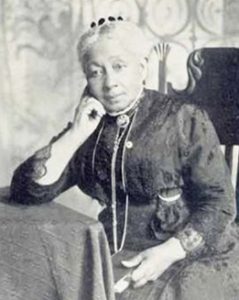 Dr. Rebecca Lee Crumpler, first African American woman physician (1831-1895). Was born in the state of Delaware and grew up in Pennsylvania. In 1860, she applied and was accepted at the New England Female Medical College. She was the first and only black woman to graduate from that school as it closed its doors in 1873. Do realize she started her training before the Civil War. As late as 1920, there were only 65 African American women doctors in the United States.

After the Civil War in 1865, Dr Crumpler and her husband moved to Richmond, Virginia, where she was quoted: “I found the proper field for real missionary work, and one that would present ample opportunities to become acquainted with the diseases of women and children.”She wrote how she had to ignore daily episodes of racism, rude behavior, and sexism from her colleagues, pharmacists and man others in order to treat a very large number of the indigent, and others of different classes, in a population of over 30,000 colored.”

The Crumplers returned to Boston in 1869 and then to Hyde Park, Massacuhutes in 1880. She published “A Book of Medical Discourses in Two Parts” in 1883.

A Boston Globe article asked Dr Crumpler what the secret to a successful marriage was and she said “is to continue in the careful routine of the courting days, till it becomes well understood between the two. She and her husband, Arthur are both buried in Fairview Cemetery in Fairview Massachusetts that were unmarked until July 2020 where a fundraiser culminated the gravestones that were installed at a small celebration.