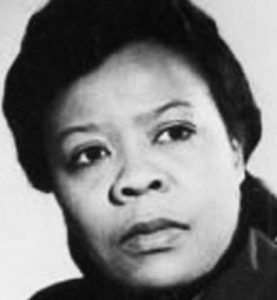 Marie Van Brittan Brown was born in Jamaica, Queens, New York City and in the mid sixties, she was concerned about safety in her neighborhood. She was a nurse and her husband, Albert Brown, was an electrician. Neither of their jobs had regular hours and with two children, she decided something needed to be done for safety. The Browns invented an early closed-circuit television system to be used for home monitoring that included a video scanning device and audio equipment. The security system also included a remote door unlocking mechanism. Her idea was the basis for all advanced home security technology in use today, in fact, when you look at it, it seems the Ring® is using this technology.
In 1966, the Browns applied for and were granted a patent in 1969. The patent, #3,482,037 had motion sensors, closed circuit television and even a remote door locking function. Brown was quoted in the New York Times as saying that with her invention “a woman alone could set off an alarm immediately by pressing a button, or if the system were installed in a doctor’s office, it might prevent holdups by drug addicts.” According to a 2016 New Scientist report, 100 million concealed closed-circuit cameras are now in operation worldwide. The Browns had two children and one followed in her mother’s footsteps and became a nurse. She lived her life in Jamaica, Queens until her death in 1999.
She received the National Science Committee awarded for her patent work. Her contribution to home security is cited in 32 subsequent patent applications. According to a 2016 New Scientist report, over 100 million concealed closed-circuit cameras are now in operation around the world.
In my job, I help people understand what a patent is and is not and what is involved in the process. Often we will look at patents that may be similar. I don’t think I have even seen a more creative diagram of the idea.  She has included the bad guy, the woman at home and even the umbrella holder! This is directly for the United States Patent and Trademark Office.  If you  click  on  the  image,  you  will  get  clear  picture. 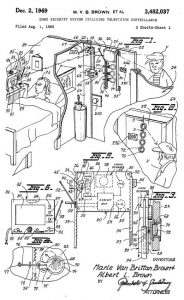