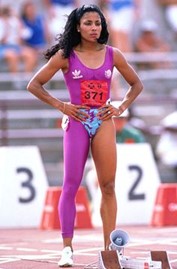 She was amazing to watch and watch her I did as in the 80s, I ran cross country for Augusta State as a returning adult student (with two kids) but I still made the team. But Ms Joyner wowed us all with her hair streaming behind her, her amazing outfits, very long nails and her most beautiful body.  Most women on the running/track universe were skinny with powerful legs. Flo-Jo was like watching a Greek goddess. For the 1988 Olympic games, she painted her 6 inch logs nails red, white, blue and GOLD! She was induced into the USA Track & Field Hall of Fame in 1995. She was also an artist and painter and her work has been displaced as part of the Art of Olympians. 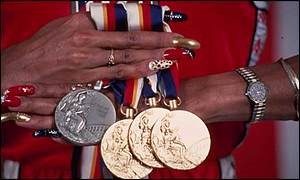 Because of her speed and the fact her records remain unbroken, there are still “whisper campaigns” that she used performance enhancing drugs. She was repeatedly tested during competition, and she PASSED all of these drug tests. Dr De Merode later said: “We performed all possible and imaginable analyses on her. We never found anything. There should not be the slightest suspicion.”  Injuries precluded her from continuing her track career.”

Griffith-Joyner died from complications of epilepsy at the age of 38 leaving a husband and daughter behind. 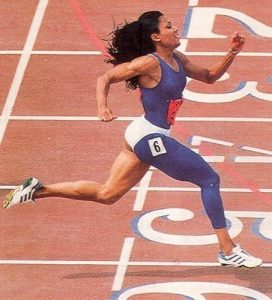 February 2018: Her flair for fashion included asymmetrical styles and very bright colors. This year, at the Australian Open, Serena Williams had a hidden meaning in one of her outfits.  “I was inspired by Flo-Jo, who was a wonderful track athlete, amazing athlete when I was growing up,” Williams said. “Well, watching her fashion just always changing, her outfits were always amazing. This year we thought, ‘What can we do to keep elevating the Serena Williams [look] on the court?’ The Nike team actually thought of this design of inspiration from Flo-Jo. I was like, ‘Oh my God, this is so brilliant.’” 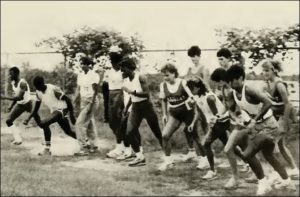 Linda Fayerweather – Augusta State Cross Country 1985. The tall one in the back – I did finish 2nd for the women!