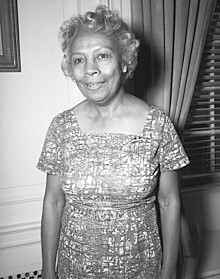 Dorothy Louise Burnett, (1905-1995) born in Warrenton, Virginia, the first of four children of Dr. and Mrs. Hayes J. Burnett. They encouraged their children to become educated and to serve. Her father was a physician, and her mother was a tennis pro who became a homemaker.

In 1929, she married James A Porter an artist and historian. Both worked at Howard University, he in art and she as a librarian. According to Julie Botnick, Yale Spring 2014, “Their marriage was a happy one, the coming together of two dynamic, creative, charismatic Howard graduates who were early pioneers in their respective fields of African-American librarianship and art history.” Years after the death of her husband, Porter, in 1972, married Charles Wesley, an American historian and educator who pioneered important studies in black history.

Porter is known for working within the Dewey Decimal system to change the way black writers were classified. She was challenging the implicit bias of the system and through the sheer volume of work at Howard, integrated the collection into the Dewey system as she felt it best represented the culture. She tried to work with the Dewey Society but that was fraught with the word “no”.

She also became known to the A.L.A. (American Library Association) as out-spoken especially in1936 when the 58th annual convention was held in Richmond Virginian. There was an effort to get a large attendance of “Negro librarians”, yet these librarians would have to enter through separate doors and sit in designated “colored” places. In her interview with the Norfolk newspaper, she said “Some of the literary work of the future should, and must, be done by people in the race, but unless our people buy more books, in general, and buy the books by our writers, they will not be able to add to our store of knowledge of ourselves and our answers, or to record fictionally the mods of our people. It happens that writers must eat and that it costs money to publish books.”

That same year, 1936, the president of Howard University was able to secure $1,120,812 in federal funding for the library which today has the purchasing power of $12,092,392. She was known for “stalking” funerals of graduates to “take care” of their books, letters, and documents for the future. She also nurtured relationships with potential donors. When she contacted Will Marion Cook, the famous black composer and violinist who had previously said he would never ever give the library anything, he did respond to her request. “Many, many thanks for your beautiful answer to my evil harangue. It brought tears to my eyes…So long as I live – and wherever I am – you have but to call upon me – and you will find that I am grateful – and shall respond.” He signed his letter “Dad Cook” and vowed to send her an autographed copy of “something worthwhile,” which inevitably would land in the library. Duke Ellington’s response was to send the original manuscript of “Mood Indigo”.

As a public librarian, I marvel at Mrs. Porter’s tenacity and clear career focus. What a glorious role model for women AND librarians.