As we move into Women’s History Month, I am intrigued by women that are now making a difference in the world. Today’s awesome woman:

Catherine Coleman Flowers is a MacArthur fellow who has come to the attention of Washington and will be on the Task Force on Climate Change.   She is the founder of the Alabama Center for Rural Enterprise (ACRE)  and as a author of Waste: One Women’s Fight Against America’s Dirty Secret. where she works to address the problem of unequal water sanitation in rural communities in the US.  In 2019, she testified to Congress about the failure of Alabama to provide affordable and effective septic systems to residents and called on policy makers to make meaningful investments at local, state and federal levels.  The resource she created with Columbia Law School is appropriately called, “Flushed and Forgotten“. 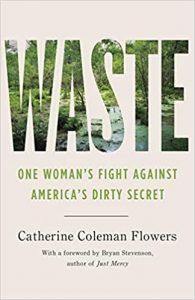 Flowers’ work builds partnerships with elected officials, regional non-profits and federal law makers including the US Congress, EPA and CDC. She has educated people on how unsafe water and raw sewage are not just problematic because they cause disease (we have collectively as humans known this for thousands of years) but disease and inadequate resources reinforce generational poverty.

She comes from a family of activists and by the age of 16, in the early 70s she became a Robert Kennedy Fellow and worked to rid her high school of the principal and superintendent that were complicit if not directly involved in sexual trafficking of black girls and one that was killed.

After graduating from college, she was a teacher in both Detroit and Washington D.C. and saw the need for civil rights first hand. Then she had a mind changing experience when she saw the movie “Inconvenient Truth”  and found herself moving back to Alabama in 2000 to begin community work in her hometown on infrastructure and nonexistent and improper wastewater management systems.

When responding to her recent appointment to Biden’s Climate Task Force of which there are only 8 people and Rep. Alexandria Ocasio Cortez is the chair, she told Sienna Zuco;

“I stand on a lot of shoulders. And I’d probably take up this entire interview just naming people who have been instrumental in influencing me from my childhood even through now,. I think what I developed from my parents was a sense of what is morally right and a sense of giving a voice to people that do not have the access, or the privilege themselves,”