Ninety-eight years ago today, Harriet Tubman-Moses-Minty died. She was a 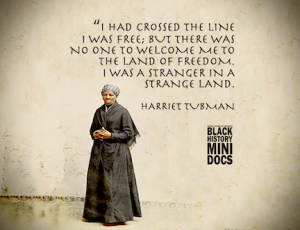 After freeing herself, she then made made some 13 missions to rescue approximately 70 enslaved people, including family and friends, using the network of antislavery activists and safe houses known as the Underground Railroad. A truly amazing American, woman and human cannot be found.
Although the legacy of the Underground Railroad often gets credited to Quakers, they were instrumental but the bulk of the conductors were escaped and born free African Americans. Will Still out of Philadelphia who worked with a Quaker and is “Often called “The Father of the Underground Railroad“, William Still helped as many as 800 slaves escape to freedom. He interviewed each person and kept careful records, including a brief biography and the destination for each, along with any alias adopted. He kept his records carefully hidden but knew the accounts would be critical in aiding the future reunion of family members who became separated under slavery, which he had learned when he aided his own brother Peter, whom he had never met before.” He and Ms Tubman were well acquainted.  If you have not read his account of the 800 people it is available at many libraries, book sellers, still and Project Gutenberg with even a Kindle version.  The Underground Railroad by William Still
I learned the song “follow the Drinking Gourd” when I was in elementary school. That lead to learning about the Underground Railroad which lead to reading a very junior “biography” about her in fifth grade. I use quotes because when I finished my oral presentation in front of the entire class, my teacher asked if the book had “quotes”, I said yes and she said then it was a novel not a biography. Chocking back tears of shame and humiliation, I went back to my desk and put my head down to hid my shame for not knowing this and for the librarian giving it to me to read!
Years later, while teaching, when biography time came around, my students always got “choices” like every good librarian/reading teacher. You can bet Miss Tubman was there. Also, most of the biography’s I would have pre-selected were women, imagine that! One time, a young boy actually asked me if there were any books about historical men, why of course, and I thought how nice that this child will grow up knowing that women were famous and did stuff!
Back to the “Drinking Gourd” which I knew was the big dipper that points to the north star, but the song is fragments of the history of routes taken. I knew the Ohio connection and the Delaware connections to freedom and as I lived in various parts of the east coast, I was amazed all the different “stations” on the underground railroad. The words “Well the river bank makes a mighty good road Dead trees will show you the way” always stumped me because anyone who is around water, rivers, knows that dead trees eventually fall over and you can’t count on a tree that is dead this year to be there next year. I also knew that to cross the Ohio River it needed to be done in the winter when the river was frozen which would mean the trees would be leafless.
That brings me to Maumee, Ohio, living two blocks from the Maumee River and being the radical rule breaker I am, I’ve been known to walk in the park after dark. The Maumee has many huge and glorious sycamore trees and in the winter with their shedding bark they truly look dead. I like to think that this may be one version of the dead trees as I do know that they are stark white on the top two thirds. There are over 3,000 documented miles of Underground Railroad through out Ohio as it bordered two slave states. Many freedom seekers stayed in areas of Cleveland, Toledo, and Akron but to truly be free until the Emancipation Proclamation in January 1, 1863, Canada was were they had to go.
In my twenties, a long time ago, I took a doll making class. These were porcelain and I decided to make my hero, Harriet Tubman although she has lost her side arm over time, she still is one of my favorite dolls. 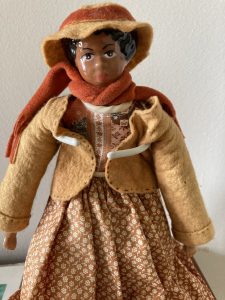