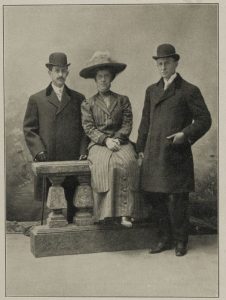 Katharine Wright Haskell (1874-1929) was the younger sister of famed airplane inventors Wilbur and Orville Wright. Unlike her brothers, Katharine finished college, graduating with a degree from Oberlin in 1898. After graduation she secured a teaching position at Steele High School in Dayton where she taught Latin.
Katharine ran the Wright family’s household and managed the Wright Cycle Company while Orville and Wilbur worked to perfect their flying machine. After the brothers’ first successful flight in 1903, she left her teaching position to assist them. Katharine managed the business from behind the scenes– she responded to reporter inquiries, answered questions from the public about the science of their invention and handled Orville and Wilbur’s social calendar. Katherine became a celebrity in her own right.
Always a tight knit family, Katharine was by Orville’s side while he recuperated from a crash in 1908 and helped nurse him back to health. She traveled with her brothers all over the world to showcase their airplane and regularly accompanied her brothers in the air—her flights helped bolster public confidence in the new invention.
After Wilbur died in 1912, she became an officer at the Wright Airplane Company. She continued to travel the world, was active in the fight for women’s suffrage and dedicated time and financial support to Oberlin College. Katharine died in 1929.
This story was presented by Ohio History Facebook page which comes from www.OhioHistory.org