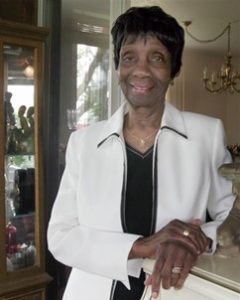 Daisy Smith, RN 1924-2020 – one of the first Black RNs in Toledo, came her as a wife and young mother two children and when her husband died shortly after the birth of the third child, she went to work as most single mothers find they must do. When housekeeping and cafeteria work did not bring her joy, she became interested in health care. Through training and education, she graduated with honors from the Medical College of Ohio with and received her RN, one of the first black women in Toledo. While working with UT’s Dr James Price, they did research and she co-authored 10 papers on the social determents of health in the black community. She became acutely aware of the need for more people of color in the health industry but also the need for more education in the black community about health.

She was a founding member of the Toledo Council of Black Nurses. “During those years there were very few black nurses,” said Ms. Smith of the reason for founding the group. “I was one of the first and there was a need for more black nurses. There was also a need in the black community for preventive health education … black nurses could fill that need.” Daisy Smith, Sojourners Truth V14 #12 July 2008

Ms Smith’s career spanned 6 decades and in the Sojourners Truth article by Fletcher Ward, in 2008 she was working to assist a long-time patient/friend in a nursing home. She was active in “getting African Americans to vote and being part of political process was equally strong. She was often involved in campaigns for local office and volunteered at local headquarters for gubernatorial and presidential campaigns. In fact, she was among those who successfully pushed to have the first political campaign established in Toledo’s inner city”. (Toledo Blade obituary March 2020)