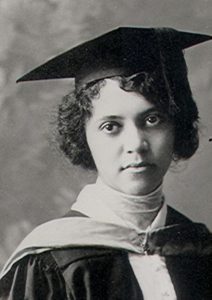 Alice Augusta Ball (1892-1916) died at 24 – just imagine what she might have discovered if she lived a longer life. She was an African American chemist who developed an injectable oil extract that was the most effective treatment for leprosy until the 1940s. She was the first woman and first African American to receive a master’s degree from the University of Hawaii, she was also the first female chemistry professor at the university.

She was offered a scholarship to study at the College of Hawaii. Her master’s thesis involved studying the chemical properties of the Kava plant species. Because of this research and her understanding of the chemical makeup of plants, she was later approached by Dr. Harry T. Hollmann to study chaulmoogra oil and its chemical properties. Chaulmoogra oil had been the best treatment available for leprosy for hundreds of years, and Ball developed a much more effective injectable form. Ball was also the first African American “research chemist and instructor” in the College of Hawaii’s chemistry department.

A publication in 1922 cited her process as the “Ball Method”. Although, recognition of her work is late, In 2007 the University Board of Regents honored Ball with a Medal of Distinction, the school’s highest honor. In March 2016 Hawaii Magazine placed Ball on its list of the most influential women in Hawaiian history. In 2018 a new park in Seattle’s Greenwood neighborhood was named after Ball. In 2019 the London School of Hygiene and Tropical Medicine added her name to the frieze atop its main building, along with Florence Nightingale and Marie Curie, in recognition of their contributions to science and global health research. n November 6, 2020, a satellite named after her (ÑuSat 9 or “Alice”, COSPAR 2020-079A) was launched into space.