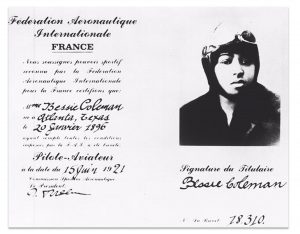 “The air is the only place free from prejudices. I knew we had no aviators, neither men nor women, and I knew the Race needed to be represented along this most important line, so I thought it my duty to risk my life to learn aviation”– Bessie Coleman (1892-1926)

Bessie Coleman was born in 1892 to a family of sharecroppers in Texas where she worked in the cotton fields as a young child while also studying at a small, segregated school. She became the first African-American woman and the first Native-American to hold a pilot license.

At 23, she moved to Chicago to live with two of her older brothers. She got a job as a manicurist and heard stories of the pilots of World War I and decided to pursue the dream of becoming a pilot. While saving money for school, she soon discovered that for American schools she had two strikes against her, she was a woman and black. Always an avid reader, in her spare time she would read the “Chicago Defender” a weekly newspaper founded by Robert S Abbot for the African American public. She had the opportunity to meet Abbott and they became friends. Abbott encouraged her to move to France where there was less racism, and she did traveling to Paris after studying French at Berlitz Language School in Chicago.

In 1921 she graduated from the Aéronautique Internationale and returned to the US with her international pilot’s license a year later and became as a “barnstorming” stunt flier.  She was often called Queen Bess and Brave Bessie for her flying skills. She used her position as the First African American pilot and her performances as opportunities to encourage other blacks to fly. She refused to perform at locations that would not admit members of her race to the flying clubs. 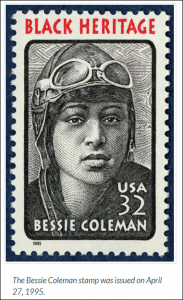 Her last flight was April 30, 1926 in Jacksonville, FL. She and her mechanic were preparing for an air show that was to take place the following day. At 3,500 feet in the air with her mechanic at the controls, an unsecured wrench got caught in the control gears and the plane plummeted to earth, not wearing a seat belt, Coleman was killed. Over 10,000 mourners paid their last respects to her on Chicago’s South Side. Eda B. Wells presided over the funeral. In 1995 the U S Postal Service issued a first-class stamp in her honor.