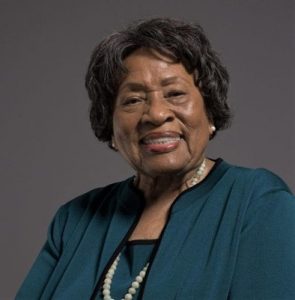 Born Minnie Lee Jones in 1933 in Arkansas to sharecroppers and was the eldest of eight children. She is an American pediatrician, public health administration, served as Surgeon General of the United States where she was only the second woman and first African American to serve as Surgeon General. She graduated from college with a BS in Biology. She worked as a nurse’s aide in a Milwaukee and joined the US Army in 1953 where she was trained a physical therapist. She returned to University of Arkansas Medical School obtaining her M. D. in 1960. She did her residency in pediatrics and later earned a M.S. in Biochemistry.

She was tapped to be the Director of Arkansas Department of Health under Governor Bill Clinton. Her accomplishments included a tenfold increase in early childhood, reducing the teen pregnancy rate by increasing the availability of birth control, counsel and sex education at school-based clinics. Between 1988 to 1992 there was a 24 percent rise in the immunization rate for two-year olds and expansion of availability of HIV testing and counseling, breast cancer screens, and better hospice care for the elderly.

In 1993, then President Bill Clinton appointed here to the position of Surgeon General. She remained in the position until 1994 when, according to Leon Panetta, “There have been too many areas where the President does not agree with her views.” She was outspoken on abortion, birth control, drug legalization,  marijuana and masturbation. Post Clinton administration, she returned to Arkansas and the University as a pediatrics professor. She has spoken at the United Nations about Aids and in 2020 she was presented with the Ryan White Distinguished Leadership Award by the Indiana University School of Public Health and the Rural Center for AIDS/STD Prevention. At 87, she continues to advocate for children and is a Professor Emerita of Pediatrics at the University of Arkansas for Medical Sciences.