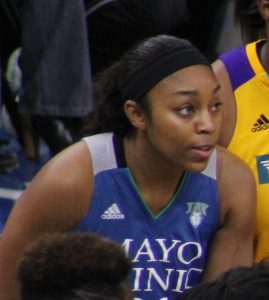 Renee Montgomery, former WNBA player is now a co-owner of the Atlanta Dream. She is the first WNBA player to become an owner and executive. Born in 1986, Montgomery to her West Virginia High School to State Champions 3 times. She won a national championship with the UConn Huskies in 2009, and WNBA championships with the Minnesota Lynx in 2015 and 2017.
In June 2020, she announced that she would forego the season because of covid AND racism. In the press release from the WNBA Commissioner Cathy Engelbert she addresses the ethics and beliefs of the players . . . “I admire their passion for women’s basketball, but more importantly, have been impressed with their values. I am also thrilled that former WNBA star Renee Montgomery will be joining the ownership group as an investor and executive for the team. Renee is a trailblazer who has made a major impact both in the game and beyond.”
The Atlanta Dream’s previous owner was a recently defeated US Senator who said about the WNBA’s alignment with #blacklivesmatter it “undermines the potential of the sport and sends a message of exclusion.”
Wikipedia page on Renee https://en.wikipedia.org/wiki/Renee_Montgomery
Press Release of ownership change https://www.wnba.com/news/wnba-approves-sale-of-atlanta-dream-to-larry-gottesdiener/
NPR coverage https://www.npr.org/2021/02/26/971877660/wnba-team-co-owned-by-ex-sen-kelly-loeffler-is-sold-after-players-criticism